Finding a voice: people with a disability in the media by: Student Journalist 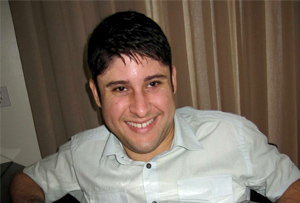 Figures from the Australian Bureau of Statistics from 2015 showed that of the 2.1 million disabled people of working age, just over 1 million were employed. The participation rate averaged out to 53%, compared to 83% for people without disability.

People with disabilities face a host of issues when trying to gain employment, such as whether they have the right image to represent a company or how an employer perceives their ability to perform tasks are all too common. John Catania is a freelance film reviewer who has written for numerous publications, such as Empire magazine, over the past decade. John was born with spina bifida and has hydrocephalus, a cognitive disability that impacts his organisation, organising of workspaces and time management.

John graduated from university with a degree in creative industries, creative writing and with minors in film studies and media and communications. He has written for a wide variety of publications in online and print news, magazines, journals and academic journals and manages ‘Reviews from the Chair’ on Facebook.

As a journalist John has the platform to share his passion for film. “I’ve always had the desire to communicate how I feel about film as an artform, and expressing that to people and connecting in that way,” he says.

He acknowledges there are limitations for disabled people in the workplace, but to John it’s “about finding that niche that I can pursue.”

There is often an indirect bias towards disabled people, where employers aren’t prepared to invest enough time, or to think creatively to adapt jobs to best suit a disabled person’s skills. Accompanying this bias is a set of assumptions that disabled people face. Assumptions about a person’s ability to perform tasks, and even more so, assumptions of the perceived hardships that employers will have to go through to restructure roles and build support networks to accommodate a disabled employee.

A difficult issue cited by disabled people is disclosing their disability on a resume. To John it is important to be honest with employers in order to succeed in his role. He says he doesn’t define himself by his disability. John’s Reviews from the Chair

In reference to a quote in The Guardian from 2012 discussing disabled journalists, John said a few people have suggested he diversify his work by writing about his disability. There is often an assumption that disabled writers only want to write about their disability.

But as John says, “it is incumbent on the person to dispel as many of those assumptions and stereotypes as they can.”

In his work as a journalist, John tells a story where he went to interview a producer after a phone call where he came across as prickly and uninterested. But when they met he softened and became much more open. As though, in Johns words, it made the conversation easier, and perhaps he assumed that it was not quite as threatening.

When talking about his experiences in the workplace, John says he has witnessed positive and negative ways of approaching employees with disabilities. In a previous role, due to his hydrocephalus, John found some of the administration tasks challenging. When he brought it to the attention of his employer, he says that “he determined from that, ‘oh well he’s not going to achieve, I don’t have the time or the resources’, if he had thought creatively it wouldn’t have taken a lot of time or resources.”

In comparison, he recalls another experience where his employer made efforts to support him. John said he would get to work in the morning to find a sheet of paper that said, “’hi John, how are you, these are some of the things I’d like you to do today,’ and that didn’t take much.”

Research from a report by the Australian government shows that when employee health and wellness is managed, there is a dramatic increase in the engagement of employees. For John, when an employer engages with disabled people they can see great achievements.

He thinks there is a changing attitude towards disabled people, as he recounts a story from some time he spent in Canada. “What blew my mind is when I was in a café and I had the tv on and they had one of the sports analysis shows, so they had a panel of experts, and they were talking about ice hockey and one of the people on the panel had a vision impairment,” he says.

“And not one word was mentioned about the fact he had a vision impairment. But to listen to him, the knowledge, the experience he brought to commentary and analysis of ice hockey, the passion, second to none, he was a peer alongside the rest of them.”

He says the real, tangible achievements of people with disabilities in their daily lives need to be put on display, instead of lumping disabled people into the cliché of ‘inspirational’ individuals who overcome day to day problems with great effort. “99 percent of disabled people fit into the middle, and want to achieve,” John says. While the issue of discrimination against disabled people in the workplace is ongoing and times are changing, more can always be done to give proper representation to those who have so much to offer employers. On the employer’s side, it means working harder to look beyond, and to separate an individual from their disability. While people with disabilities should be encouraged to have high expectations of themselves and their own abilities.

Adam Baker, an advocate and spokesperson from the Endeavour Foundation, said this at the launch of Project Open Doors, “yes, we may find things a little hard, but we deserve the same freedom and opportunity as anybody else.”