The big fight with the stereotypes by: Student Journalist 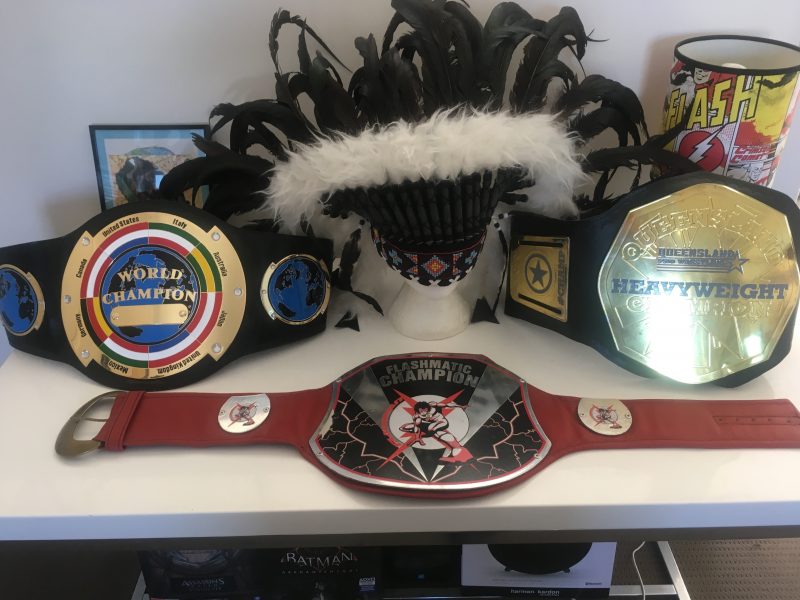 James Fraser-Smith’s opponents in the wrestling ring keep learning the hard way that it’s the size of the fight in the man that counts. And in a sport, where size and strength are considered an advantage Fraser-Smith exposes the fallacy and has exploited it all the way to championship belts.

But Fraser-Smith and big fights are no strangers. His first was his biggest and his tiny body holds the litany of evidence to prove it. At just two years of age he fought and beat stage-4 neuroblastoma cancer that was destined to kill him. Indeed, it kills 70 per cent of sufferers. “I was pretty much in and out of hospital until I was about five,” he recalls. “Of all the children in that ward at that time, my treatment was experimental, so much so that out of everyone in my ward at the time, I was the only one to walk out alive.”

And that walk came at enormous cost to his now fragile body. “Being the fact I was at such a young age (and) being the prime time the body starts to grow there is a lot of aftermath effects I have to deal with now on a daily basis,” the 27 year old openly admits. “Height being one of them, bone density, teeth, weight and I have one kidney there.” As he speaks, Fraser-Smith exudes an envious nonchalance towards the myriad problems that lurk in wait to hijack his tiny body without notice. One such problem struck at the tender age of 11. “The hip joint to my leg is very weak and in 2000 my leg slipped behind my hip and they had to pin it back together because it’s (still) weak from all the radiation.”

Society has a cruel way of measuring advantage and one crass unit of measure is proportionality, which in essence, feeds stereotypes. We instinctively anoint certain attributes we have in surplus as being advantageous whether that be taller over smaller, quicker over slower or stronger over weaker. Yet, Fraser-Smith possesses an arsenal of attributes, which he deploys to demonstrate that it is not having more that counts but how we use what we have. And there have been many, who have encountered Fraser-Smith, who have learned just how cutting that reality can be.

“I was walking down a hallway one day and I saw two guys approaching and I got that vibe that these guys were definitely going to say something. I hoped I was just being paranoid but sure enough they said something,” he said.

“One of the guys looks at me and says ‘check out this kid, he’s pretty short. My dick is bigger than him’ and without hesitation I said ‘well, your dick isn’t very big then is it?’”

It is not a case of one having to be there to get the joke, but Fraser-Smith’s telling makes you wish you were just to witness two stereotypical males learn one lesson many men seem reticent to learn. It’s not the size that counts – boys – but how you use it.

But Fraser-Smith is a humbler, who teaches through example the folly of stereotyping. He spends little time focussed on the obvious knowing the pointlessness of wishing that his physicality was more proportional to most males his age. Instead, he focuses on that which he can impact so physicality to him is an emotional waste of time.

But mentally? Mentally and psychologically Fraser-Smith is a giant.  “I view it (my size) as like celebrity in reverse,” he continues. “When I tell people my age they’ve got this confused look like it doesn’t compute but there’s always been weird looks and stares and under the breath comments. But it’s celebrity in reverse. Look – it’s different!” His old school mate Jared Mullane, whose towering 6 foot 3 inch frame dwarfs Fraser-Smith’s, recalls the mental toughness that was apparent in Fraser-Smith during their teenage years and how this toughness held up mirrors to the ignorant. “When you’re 14 or 15 years of age you are going to get immature people,” Mullane recalls of their school years together.

“Your brain hasn’t fully developed itself (and) when you throw all that in the mix of the school yard there were going to be a few remarks at James.

“But those people, who were trying to make fun of James, (soon) learned that they were insecure about their own appearance.”

And today Fraser-Smith has made an art of channeling to his advantage the ignorance of the stereotyping masses. This mastery is never more evident than in the wrestling ring, where he goes from smashing the stereotypes to smashing his giant opponents. And it’s the small minds of those big men that are no match for Fraser-Smith.

“I take no prisoners,” he says so confidently one truly has no choice but to believe him. “I play cat and mouse with them until the mouse wins.” And the mouse certainly does win because in a sport full of giants, Fraser-Smith has several championships under his belt. However, there is one in particular that forever bears witness not only to the mental giant he is but to a talent he possesses that is arguably without precedent – smashing stereotypes.

You see, Fraser-Smith is also a heavyweight champion.

A shorter version of this story was front page of the Gold Coast Bulletin 5th August 2017. View @ https://goo.gl/KqbrH9