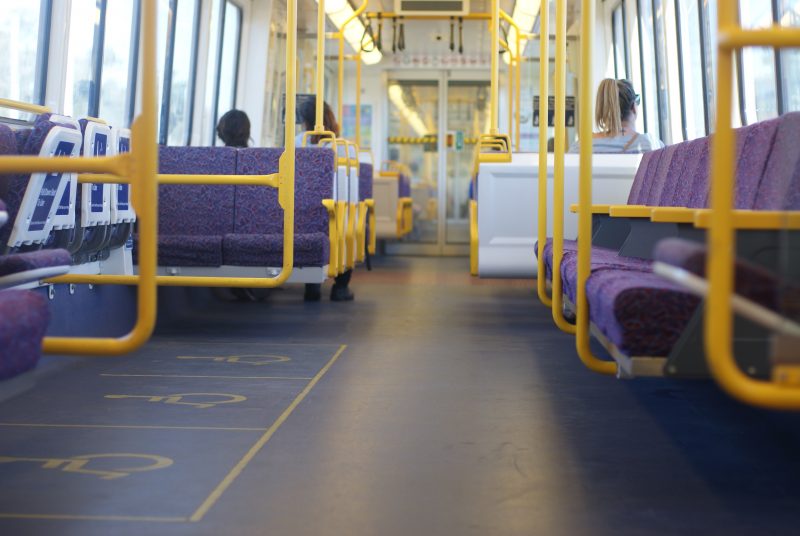 Calls are growing for a trial of ‘please offer me a seat’ badges for public transport in Australia, following a successful trial and permanent implementation in London.

Transport for London introduced ‘please offer me a seat’ badges for those living with an invisible disability, to raise awareness and increase seats being offered to those who may need them.

The scheme was introduced following the success of ‘I’m pregnant. Please offer me a seat’ badges – and inspired by the ‘cancer on board’ badge made by one passenger so he could secure a seat following treatment appointments.

With one in five Australians living with a disability, public transport plays a vital role in promoting inclusiveness and enabling people to contribute socially and economically in their own lives. Brittney Rigby, a young woman who found herself unable to walk at sixteen due to knee problems, has spoken about how she wishes the government would consider a trial in Australia.

“I think of what a ‘please offer me a seat’ badge would do for me, and I wish that state governments across Australia would consider such a trial in our transport systems,” Ms Rigby said.

Ms Rigby pointed out the problems that exist around public transport for people with disabilities, explaining some train stations do not have accessibility for everyone.

“Some train stations still don’t even have elevators or accessible entrances…how are people with disabilities able to properly and fully participate in their lives when the public transport system doesn’t allow them to move through the world safely and comfortably?” Ms Rigby said.

According to the National Disability Insurance Agency 88% of disabilities are invisible and Ms Rigby is concerned those living with invisible illnesses or conditions are overlooked.

“Invisible illnesses might be invisible. The people who suffer them shouldn’t be,” she said.

While some people have praised the concept of making others aware and hopefully more considerate of thier condition, the scheme has also attracted its critics.

Queensland’s Anti-Discrimination Commissioner, Kevin Cocks is concerned  these badges create more problems than they solve by making people with disabilities stand out as different to those who do not live with a disability. “I think the intent is honourable but there are unintended consequences that flow from being labelled and as being seen as ‘the other’,” Mr Cocks said.

Mr Cocks has followed the London scheme’s implementation noting the very hands-off approach Transport for London has taken once people obtain their badges.

“It’s voluntary, it identifies staff won’t become involved if there is conflict, and I think all of those things mean raising the potential for conflict is heightened, particularly where someone who may require seating but does not want to labelled,” he said

“I think it is well intended but poorly executed.” Obtaining a badge is as simple as registering your details online and having a badge and accompanying card sent out in the mail which means anyone, disabled or not is able to get a ‘please offer me a seat’ badge.

Mr Cocks is concerned this cause further implications for people within the disabled community.

“Anyone could apply as a means to getting a seat, and scam the system and then if that’s discovered the backlash against people with hidden impairments, who already are judged… can lead to other issues like depression and feeling inadequate and being a lesser person,” Mr Cocks said.

During the ‘please offer me a seat’ trial period last year 72% of badge testers said it made their journeys easier, while 98% said they would recommend using the badges.

Around 25,000 people have registered for the scheme but Transport for London have allocated no funds for advertising or marketing the ‘please offer me a seat’ badges and have only promoted the scheme on social media. Queensland’s train stations can be difficult to navigate when travelling with a disability. Photo: Holly Fenwick

London author and photographer, Jean Trend-Hill, who lives with ulcerative colitius and osteoporosis, kept a travel diary for one month recording her journeys for news site, metro.co.uk.

Ms Trend-Hill found the badge did not make much impact as many people were not aware of what the badge was for.

“When I saw the size of the badge I thought it looks quite reasonable and hopefully it should get people’s attention and I was honestly surprised that it didn’t,” Ms Trend-Hill said.

Mr Cocks suggests we need to have conversations, asking we use common sense and decency instead of using a badge to solve the issue.

“I think it really comes down to empathy…if you needed a seat you could always ask, say to another passenger “I really need to sit down, do you mind?” Mr Cocks said. Some in need of these badges have pointed out it is not always so simple. James McNaught, the man who created the ‘cancer on board’ badge explained getting a seat could be difficult as he could not always communicate.

“When I was undergoing radiotherapy for throat cancer, it meant I couldn’t talk to ask for a seat and the morphine I was taking made me appear drunk,” Mr McNaught said.

“I couldn’t even ask to sit down…I must have looked weird, and I could see people backing away from me sometimes on the tube, but I had no way of explaining what was wrong.”

Mr McNaught said that the ‘please offer me a seat’ scheme would have been helpful.

“A badge can make a real difference to the lives of people undergoing drug treatment or with longer term conditions or disabilities,” he said. Seating for people living with a disability. Photo: Holly Fenwick

Other cities are following in London’s footsteps with the New York Transport Authority rolling out a similar scheme earlier this year where they provide badges to pregnant, elderly or disabled passengers as part of an ongoing campaign to encourage politeness among commuters.

Metropolitan Transport Authority Interim Executive Director, Ronnie Hakim said the badges assist people who may not want to explain themselves. “Pregnant riders, seniors and those with disabilities often need seats more than others but their condition may not always be visible. We hope this campaign will help their fellow riders to be more willing to offer them a seat without having to ask a personal question first,” Ms Hakim said.

While change.org petitions and calls for similar badges to be introduced in Australia continue, state governments have not announced any plans to trial the scheme.