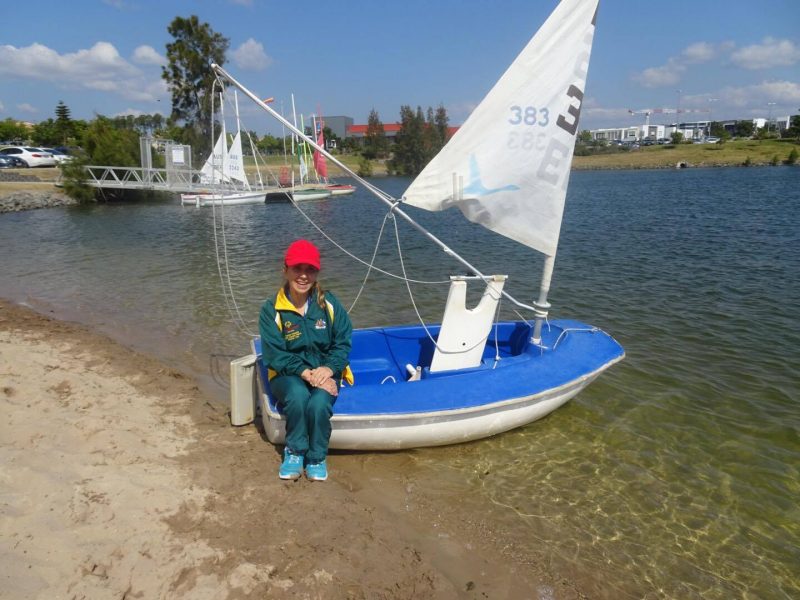 Every two years, thousands of athletes travel internationally to compete at the Special Olympic World Games.

The flagship event aims to showcase the skills and accomplishments of people with intellectual disabilities on a global stage.

Professional sailor, Belinda Hill describes the Special Olympics World Games as unlike any other sporting event she has ever seen.

Ms Hill, who has represented Australia twice internationally, said that everyone is treated equally.

She is given special permission to compete in the games because she has spina bifida.

“There is always respect there with other athletes,” she said.

“No matter where you come from, everyone is there for each other no matter what the result.”

For her first world meet in 2007, Ms Hill travelled to Shanghai, China where she won silver for sailing.

Three years later she went on to win a gold medal in Athens. Ms Hill described her achievements as a dream come true. Belinda in her olympic jacket from the 2011 Special Olympics in Athens. Source: Jaime-Lee Woods

“It feels great to win a medal for your country,” she said.

“It’s not so much about the medal itself, it’s the work to get there and the fact that you have done something for your country that’s worthwhile,”

“It shows others that you can achieve something if you really want to no matter what walk of life you come from, whether its disability or not.”

Ms Hill enjoyed competing with athletes from all around the world.

“I got to see another side of sporting in another country and see how other countries do things,” she said.

“Athens was fantastic, although it wasn’t easy because we had the Greeks on our tail a lot of the time and that’s who we actually beat.”

In order to make it to the Special Olympics World Games, athletes must be successful at a national level. When preparing for these races, Ms Hill trains three times a week.

She said that without her coach, Chris Ruston, she wouldn’t be at the level she is today.

“He’s taken a lot of time out of his own life… to be part of this program,” she said.

“I admire her stamina; she doesn’t give up, she’s tough as nails.”

Ms Hill met her coach through Sailability, a program which helps people of all abilities become interested in sailing.

Sailability volunteer, Marianne Ash, has been working with Ms Hill at the Gold Coast Sailing Club in Varsity Lakes for the past six months. She said she enjoys helping people with a disability overcome accessibility issues and get on a boat and sail, sometimes for the first time.

“We help them first off with their life jackets, then we help them in and out of the boats,” she said.

“Some have gotten to the stage where they can get in and out on their own which is fabulous.”

“People don’t realise the amount of time that the volunteers put into this kind of effort,” she said.

“I work at Currumbin as well so it’s totally different and very rewarding.”

The Gold Coast Sailing Club’s Disability Sail Training and Special Olympics Programs have produced the most ‘Solo Sailors’ of any similar program in the world. These professional sailors’ talents are rarely seen by the public as the Special Olympics is not broadcasted on Australian television.

Ms Hill’s dream now is that her sport is better recognised.

She hopes to one day see disability sports events on mainstream television.

“I’d love to see the Special Olympics televised and my mum would love to have that too,” she said.

“It has only been in the last five to ten years that the Paralympics have been televised but they put that on Channel 2 or SBS and none of the big channels because there’s no money in it for them.”

Ms Hill believes that in order for change, the younger generation needs to be educated.

“Don’t get me wrong, it’s is slowly getting better but there is a long way to go with the new generation coming up,” she said.

“We don’t expect them to know every type of disability, but what we do need them to understand is that it happens to people, and it’s never going to go away.”

“When I go out in public, there’s always someone staring,” she said.

“There is a lot of people out there from experience that are really kind of scared by it and a little bit stand offish about it because they don’t understand what happened to that person.”

Ms Hill admitted that she has not always felt at peace with her disability.

“As much as I hate my situation I have learnt to deal with it, and I’m allowed to say that I hate it,” she said.

“Once you eventually accept a situation you learn to get over that barrier of “poor me” syndrome which I went through a little bit growing up,”

“As I grew older and understood myself more and saw other things around me I looked at myself and say hey, what have I got to be worried about.”

Looking at the future, the professional sailor is working toward her next Special Olympics World Games.

“I have just made the state team to go to Adelaide for national selections,” she said.

If Ms Hill is successful at the Special Olympics National Games she will be off to Abu Dubai in 2019.

She hopes that people will have the chance to see it on television and will become more educated and have more compassion towards people with disabilities.

“They shouldn’t be seen as an embarrassment,” Ms Hill said.

“Every day someone in the world is born with a disability, and it’s not going to go away.”