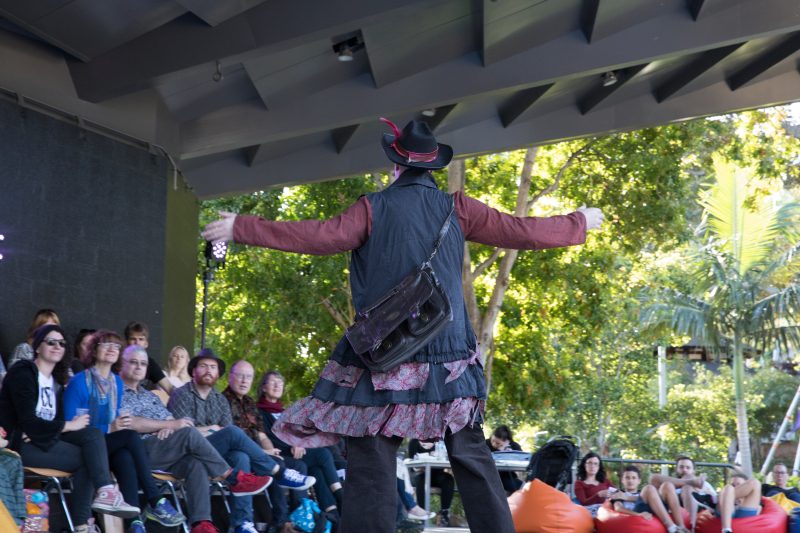 It’s a sunny Saturday afternoon at Brisbane’s Roma Street Parklands and people arrive at the amphitheatre and choose their seats.

Meanwhile, the actors welcome them with smiles and live atmospheric music.

It is late winter, and The Winter’s Tale by William Shakespeare is about to start.

This is the first time that the Queensland Shakespeare Ensemble (QSE) has performed a ‘relaxed play’. Actor and Artistic Director Rob Pensalfini opens the performance by explaining what this relaxed performance entails.

“We want you to feel free—,” he started, but decided to stop there. That was the simple takeaway message, for the audience to feel free to do as they please.

The relaxed performance is not only for people with cognitive disabilities or sensory conditions, but for anyone who does not want to feel restricted.

“There’s a lot of society that struggles to sit still in a dark room with strangers and they shouldn’t have to,” she says. To top it off, she says plays and live performances emit a lot of emotions at people in the audience, who are expected to handle that. It’s not surprising plays can be quite confronting to a lot of people.

Ms Hardisty points out cultural events, such as theatre productions, do not naturally consider people with sensory disorders or cognitive disabilities.

“They have gradually [been] improving things in terms of physical disability access, that’s gradually been improving maybe in a faster rate, and maybe because we can understand it more easily if someone can’t walk,” she says.

Ms Hardisty’s brother has autism and, speaking from her own experience, she hopes the performance is a chance for family members or carers to sit back and relax too.

“I’ve seen first hand what kind of things are difficult for him and for me when I take him to the theatre. I spend about half of my attention checking that he’s alright, checking that he’s not talking or being inappropriate,” Ms Hardisty says.

She first heard of a relaxed performance in England and pitched it to her colleagues at QSE.

“The reason it works so well with the Shakespeare show is because historically, in Shakespeare’s time, the shows weren’t designed to be in a black theatre with no noise,” she explains.

Rather, people were walking around and chatting during the plays.

“Shakespeare’s plays can handle that, they don’t require that level of audience respect,” Ms Hardisty says.

Rob Pensalfini explains to the audience that if you do not like your seat halfway through the show, you can switch. If you need to take a break, you can go to the “chill-out room” or take a stroll around the park. Talking is allowed, even to the actors. “You know how in theatres, if you’re wanting to go to the loo but you don’t want to get out, this relaxed performance we just want to make it explicit that you can move around,” he says.

Needless to say, the performance turns out to be quite different from the norm.

A man mumbles something to his neighbour on the front row and there is no passive aggressive sighs or hushes to go with it.

Children, seemingly undecided, rotate between their seats next to their parents and the colourful bean bags to the left of the stage. A mother is nestled into a blue one, nursing her baby while enjoying the show.

Ms Hardisty’s family friend and patron Chris Pavey has never been to a relaxed performance before. She is full of praise for this innovative approach.

“I like the approach of the relaxed [performance] because we were here with Ian who is autistic, and it was very appropriate for him to go off when he felt that he needed to and come back when he was ready to so it was wonderful,” Ms Pavey says.

She is happy to see young parents at the performance.

“They could actually take the little ones to things like this. How could you do that in a normal theatre?” she says.

The Winter’s Tale has something for everyone and lends itself perfectly to a relaxed performance, according to Director, Michelle Miall.

“In this production, there’s actually not a great deal of the actual performance itself that needs to be modified, it’s more about creating that environment for the audience on the day of that performance, a space that’s welcoming and inviting and comfortable and safe,” Ms Miall explains.

“We talk of the audience being the last piece of the puzzle, and they join in and make the performance come to life”. “We don’t pretend there’s a fourth wall, we actually connect, but knowing the nature of the relaxed performance we don’t have to stare down anyone,” he adds.

He feels there is an implied social exclusion at other theatres, and that is exactly what they are trying to break.

“I think theatre unfortunately is very exclusive, either financially or community wise, too,” Mr Rus says.

“Being on the stage was actually pretty fantastic rather than being out there so you felt it’s a more intimate production and you really felt part of it,” he says. QSE has many community initiatives to get more people interested and involved in theatre. They annually host the Shakespeare Prison Project where inmates stage a production for family, friends and other inmates.

QSE also has A Night At The Theatre where patrons are encouraged to donate tickets to people who otherwise could not afford to go see the performance. Since its launch last year, other theatre companies are doing the same and QSE hopes the relaxed performance will have a similar effect.

“That’s at the heart of QSE, it is collaborating without discrimination,” Mr Rus says.

QSE members were delighted by the response to the relaxed performance and Ms Hardisty hopes they will continue with it next year.

“You know, maybe one day all theatre will be like this,” Hardisty says.