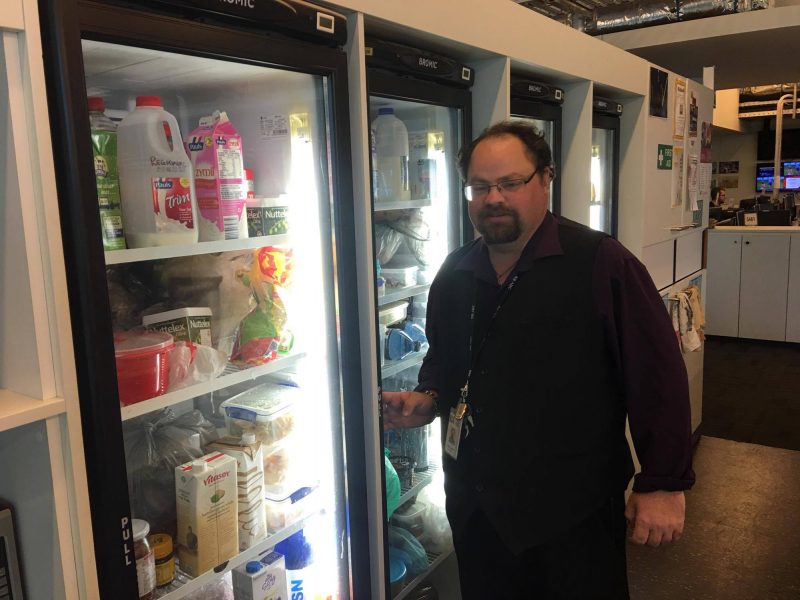 Barry Harwood showing off one of the many kitchens at the ABC office. Photo: Jana Gabrijel

Barry’s eyes light up as he walks past old friends in the ABC office. His head held high and chest forward, confident as he paces with pride in a workplace where he knows he is valued.

ABC Staff Support Person Barry Harwood lives with an intellectual disability, and has been a welcome team member at the ABC office since 2012. Barry is responsible for the mail, cleaning the kitchen, restocking the stationary cupboards, refilling the photocopier with paper, looking after communal rooms and more. Barry Harwood restocking the paper in the printer at the ABC office. Photo: Jana Gabrijel

“I feel like I am an important part of the team in a big way, I make people happy here day by day,” Mr Harwood says.

Gazing into the distance of his office room, Digital Managing Editor for ABC News Stuart Watt beams a smile as he recalls joyful memories Barry has brought to the office over the years.

Stuart says Barry’s cheerful personality is infectious, breathing life and happiness into the office space and everyone he interacts with.

He goes on to say that Barry is the most popular person in the office. He always has a smile for people and he loves to stop for a chat; eager to find out what his colleagues have been up to on the weekend.

“In a workplace where some of the stuff can be quite depressing, Barry is like a breath of fresh air,” Mr Watt says. Barry Harwood showing off one of the many kitchens at the ABC office. Photo: Jana Gabrijel

Everyone, regardless of their disability has the right to feel connected, gaining quality and rewarding employment which leads to a more meaningful life.

A 2015 ABS Survey of Disability, Ageing and Carers concluded that 18.3% of the population (one in five people) in Australia, reported as living with a disability.

He says unfortunately there are social stigmas that come with hiring a person with disability, such as what extra support they might need.

He goes on to say that a lot of the difficulties people with disability face in employment has a lot to do about the assumptions people make about what they can and can’t do; expecting that a person with a disability needs to have the same amount of experience as someone who doesn’t.

“The fact of it is that a disability can impact on the way a person does things, but that doesn’t mean that a person with a disability can’t do it; we must learn to take each individual as they come,” Mr Cooper says.

In terms of employment and job suitability, Mr Cooper says grouping people and making assumptions based on their disability should be avoided.

“Two people may have the same disability, but they can both deal with it in very different ways; some may be impacted by their disability more than others,” Mr Cooper says. Geoff Cooper has a lot to say about employment and disability. Photo: Jasmine Cooper

Unfortunately, Production Worker for Endeavor Foundation Food Packaging Solutions Steven Clark, has had some extremely negative experiences in open employment. Mr Clark worked in a factory where he was physically and emotionally abused by his bosses.

“They were so nasty to me, they threatened me, they called me names, they choked me around the neck, it was the worst job ever,” Mr Clark says. With wide eyes and excitement back in his tone, Mr Clark sat up straight and told how he would one-day love to go back into open employment, however, he is nervous because of that experience where he was treated poorly.

“I am who I am, I have a disability, I have a speech problem and I want people to treat me nice, but out there, half the people do treat you well and half don’t,” Mr Clark says.

Manager of Employment Outcomes at Endeavor Foundation Michelle Howells says the key to a successful job placement is for disability employment services to ensure that employers have the appropriate supports available for people with disability. Chief executive of the Australian Network on Disability Suzanne Colbert agrees, saying people with disability have a good experience in open employment when: the job match is right, the training and support is right, and when the employer has an open mind and is willing to do things differently to accommodate the needs of a person with an intellectual disability. Only then will the employer be able to achieve long term durable and sustainable employment from a valuable employee, with an intellectual disability.

Ms Colbert says she has worked with many people with an intellectual disability across a range of roles including: fast food, pharmaceuticals, kitchens, offices and even in scientific laboratory settings.

“There are many environments available for a person with an intellectual disability, but it’s really about if the jobs fits; and in my experience, jobs that are reasonably easily explained, that don’t have complex judgements required of them, are the best kinds of roles,” Ms Colbert says.

She says people with a disability should work with an employer to identify how their skills can be best employed in an organisation, rather than just responding to a job ad where some of the job requirements may not fit. Therefore, employers who are open to recruiting people with intellectual disability, really should take the time to truly understand that individual, and to develop their skills and capabilities so that they can have long term satisfying future careers. As a result, employers are more likely to have long term employees who make a great contribution to their business. Barry Harwood and Stuart Watt have become great friends during their time at the ABC office. Photo: Jana Gabrijel

Ms Colbert says employment support services need to teach in those specific ways, so that people with an intellectual disability, are very clear about their role requirements, and the level of support offered in that particular role.

If that happens, then hopefully there will be more great stories like Barry’s at the ABC. Where both the employee and the organisation they work for have gained from the experience.

Pondering this, Mr Watt sits upright in his chair whilst leaning in to speak.

He says having Barry as a part of the team at the ABC shows how with only a little effort from an employer, such as the ABC, a role can be made that plays to the strengths of people with disability, to the great benefit of all.