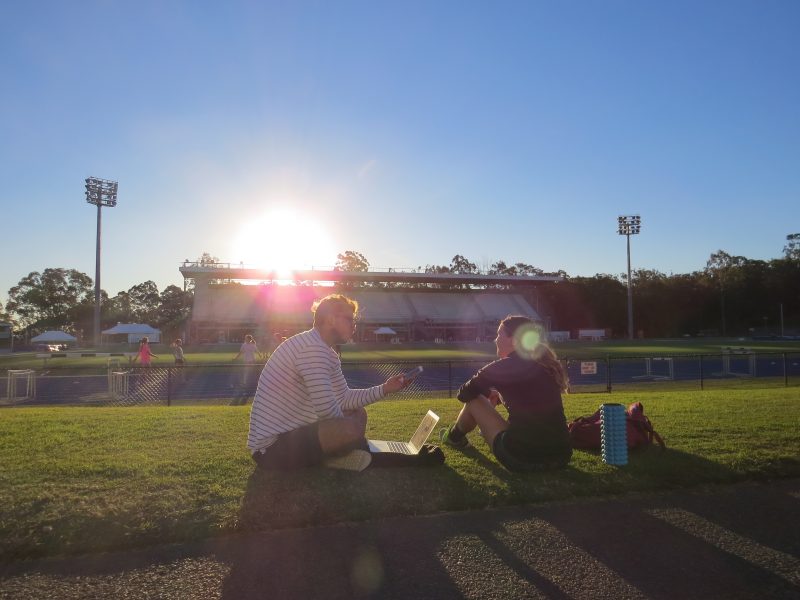 Deaflympics athlete Jaime Howell takes a break from training – photo: Jackson Paine
The Australian deaf community has defended Australia’s poor performance at the recent 2017 Deaflympics in Turkey – saying federal government funding cutbacks have made it impossible to keep up to international standards.
Jackson Paine has this radio current affairs report from the Queensland Sports and Athletics Centre. Jamie Howell is a 19-year old partially deaf athlete, who recently competed at the2017 Deaflympics Games in Samsun Turkey.

Jamie Howell (JH): “It was an amazing experience. I’m so glad I went, like it was just really cool to meet deaf athletes from all over the world. It’s something I will definitely do again.”

But unfortunately, Jamie’s attendance at the 2021 Deaflympics  set to be held in either Los Angeles or Dubai, might not be purely a matter of whether she is running fast enough to qualify.

Funding from the Australian government for the event, which predates the Paralympics by 36 years, is at an all-time low.

Despite this negligible support from the IOC, CEO of Deaf Sports Australia Garry West-Bail foresees this situation evolving positively over the next decade.

Garry West-Bail (GWB): “Longer term I think there would be a much more practical and strategic inclusion of the Deaflympics into the IOC system.”

But CEO of Deaf Services Queensland Brett Casey, who sat on the legal commission for the event last month, says the government’s disregard was very apparent.

More than 3,000 athletes from 97 countries competed in 21 sports over the two-week event.

Yet the Australian deaf athletes failed to bring home one medal in the 23rd instalment of the Games.

Peter Krupka (PK): “We continue to work with Deaf Sports Australia to discuss potential linkages between the Active Deaf Kids program and the ASC’s Sporting Schools Program. The ASC is also currently finalising some project support investment to assist with this.”

Yet Deaflympics athlete Jamie Howell says she will believe it when she sees it.

Her sport has been forced to deal with such neglect over her time in competition, that the 2015 Deaf Sports Australia’s Female Athlete of the Year believes the potential of Australian deaf athletics is still far from being realised.

JH: “I just think that, like, the Australian team was so small compared to other countries and I think a lot of that is due to the lack of funding we have. So, I think the more funding we can get, the more athletes we will have, the better we can perform and, hopefully, actually start bringing home medals.”