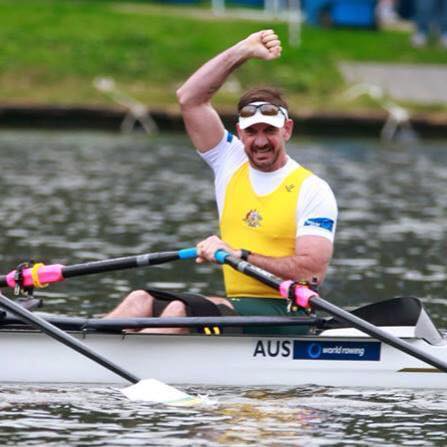 Listen to podcast of interview below…

Imagine it’s 90 minutes before the big race. Bow number collected, oars by the water’s edge, foot stretcher adjusted, riggers set, bolts tight. It’s now 60 minutes to go. You start to focus. A slow jog to warm up, muscles are stretched out, your earbuds are in, music flaring, you start to feel the pressure. Now approaching the 30-minute mark. You move away with your coach to somewhere quiet, words are exchanged but you already know what to do.

The scull is ready for you, lifted on your shoulders. You walk across the pontoon, and set it down gently, cautious of the carbon fibre underneath the paint. You tighten the gates so your oars are secure, start paddling towards the start, execute drills, practice techniques, blood is pumping through your body. T-minus 2 minutes.

Ready, set, row…is the call from the starter’s voice. You power through the 2000 metre race course, ripping the water, with all your might. Legs, body, arms, arms, body, legs. That’s your stroke sequence, simple but effective. Seven minutes later, you’ve done it, it’s all over. However, for retired Paralympian rower, Gavin Bellis it’s not over.

“Everything from getting in and out of the boat, trying to keep in time with my partner, controlling my blades. All of which everyone faces in rowing but for me it was just a lot, lot harder!” Gavin explains.

Growing up as a teenager in the small suburban beach town of Tin Can Bay located in Queensland’s south-east, Gavin was always close to the water, whether it was fishing for hours on a Sunday afternoon, sailing across the bay in his family’s boat or even grabbing his surf board when the swell was just right.

“I come from a military family so we moved around a lot,” he says. “I spent my high school years in Tin Can Bay.”

Fast forward to 2004. Working as a diesel mechanic with the Australian Army, Gavin was following the path the rest of his family had walked.

“My job in the Army was very rewarding and challenging, I got the see a lot of the world, met some great people and made lifelong friends,” he says.

It was September 2004 that Gavin’s life would take a new course. Spinocerebellar Ataxia: a hereditary disease that affects one’s movement control, primarily affecting balance and coordination.

“I was diagnosed in 2004. It was a huge shock! I had two daughters, 15 months and two months old, and they couldn’t tell me how long I had before my condition got a lot worse, you know, either 24-hour full time care or worse or stay the same. I consequently was medically discharged from the Army; it was a very dark period of my life.”

After contacting the Australian Paralympic Committee some years after his discharge, Gavin took his first rowing strokes in 2010. For him, water sports are in his blood.

“With my disability, it was the category that I fit into,” he says. “In Paralympic sport or any sport that people with disability compete against each other in there are classifications to ensure a fair and level playing field. The Trunk and Arms mixed double scull was the rowing category that I was classified into.” Within his six-year stint as an elite level competitive rower, Gavin achieved monumental heights in the sport, from local club regattas to winning three back-to-back world championships in 2013, ’14 and ’15 as well as representing Australia at two Olympic Games, being London and Rio.

When asked if he had ever thought he would represent his country, Gavin light-heartedly replies, “Not at all, I think for the first month of rowing I fell in every second day, and the Yarra in Melbourne isn’t a place you would choose to go swimming. Staying in the boat was my one and only focus!”

Having reached such stature as an athlete, Gavin has also made some lifeline connections. Griffith University Surfers Paradise Rowing Club Head Coach and former Australian rower himself, Lincoln Handley has nothing but respect for Bellis and his abilities. “To have that success, to be the best in the world, it’s pretty bloody awesome! I mean, only one person can be the best in the world,” Mr Handley says.

When you ask Lincoln: Is Gavin Bellis a rower or a para-rower? He replies with, “To be honest, I think of him as a world champion rower. I’ve seen enough to know that those guys [para-rowers] train hard, and train at the limits to what their body lets them. He [Gav] trains just as hard as any other able-bodied rower.”

After competing in the 2016 Rio Olympics, Gavin was feeling his body catching up to him. “The nature of my disease and the effects on my body make rowing the most difficult sport I could do,” he says. “I lack fine motor control, balance, and coordination all of which are crucial in rowing.” It was October 28, 2016 that Gavin made the call to Rowing Australia and announced his retirement.

And like any other professional world-class athlete, rowing took most of Gavin’s time, affecting not only himself but his family. Gavin headed in after a surf session. Photo: Gavin Bellis

“Over the four and a half years I was on the Australian Rowing Team I spent two years away from my family,” he says. ” That included two, nine-month stints where I lived and trained interstate. The family sacrificed a lot for my rowing career, and remember it is amateur sport so even though I was world number 1 and lucky enough to have some support and funding, it was extremely financially difficult as well.”

Now living on the Gold Coast, Gavin has recently bought himself a ticket to the US in November after winning the AS4 category at the 2017 Nudie Adaptive Surf Titles, and it seems although retired from rowing, Gav’s love for the water and competing still runs deep.

Below is a short snippet from my interview with Lincoln Handley: