Improving your communication with people with a disability by: Student Journalist 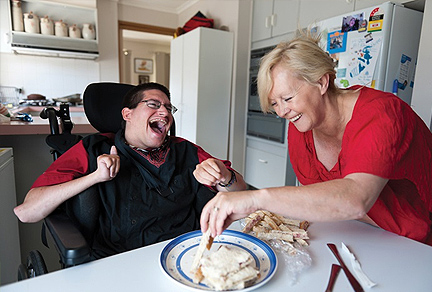 Let’s be honest, some people can find communicating with people with a disability a bit daunting.  They may be worried about appearing patronising or not understanding what’s being said. Or even worse – causing offence.

I’ll never forget one of my first experiences as a young support worker taking a woman I was supporting, Sally, to her regular GP.  We walked in and took a seat. The doctor insisted I sit where the patient would normally sit.  Uncomfortably I sat down and then the doctor proceeded to talk to me about what was wrong with Sally. Not once did he look at her, address her or acknowledge in any way that she was even in the room.

I automatically turned to her and asked if she wanted to show the doctor any of the pictures in her ‘compic‘ book. Sally opened it up but the doctor dismissed her and spoke to me again, clearly irritated, and this time more sternly.  I described her symptoms and within a few minutes, we were both out the door with a script for antibiotics.

I know doctors are busy but I also knew that Sally had been completely disrespected and I’d had a part to play in that.  Why hadn’t I insisted that she be involved in her own consultation? Why hadn’t I done something more?

For the first time I put myself in Sally’s shoes and I felt awful.  I wondered if Sally had experienced this her whole life -people ignoring her and speaking to her through other people or not at all.

Did she feel as helpless as I felt not being able to properly advocate for her at that point in time or was she so used to being treated this way that it was all she knew?

I made the decision there and then that I would make every effort to communicate directly with people a disability and not in isolation of them, no matter how hard it was.

After all, just imagine for a moment how it would feel to be unable to communicate, “I am scared”, “I am hungry” or “I love you”.  We all have a basic need to be understood by others.

I’ve prepared some simple tips to help you improve your communication with people with a disability:

Speak to people with a disability the same you would as anyone else, and in your normal voice.

Things like eye contact, body movements and tone of voice. All of these signals can convey important information that isn’t put into words. A person’s overall demeanour is far more telling than a single gesture viewed in isolation.

If you are confused about another person’s nonverbal signals, don’t be afraid to ask questions.  A good idea is to repeat back your interpretation of what has been said and ask for clarification. For example, someone may tell you they are happy while frowning and staring at the ground.

Talk directly to the person with a disability, not about them

Don’t act as if they are not in the room and only speak with their carer, or assume that they can’t understand what you are saying.

Give time to process

Sometimes people need a little more time to process what you’re saying, for example, if they have an intellectual disability.  Give them time rather than repeating yourself.

Use signals to make communication more effective and meaningful

Remember that verbal and nonverbal communication work together to convey a message.  You can improve your spoken communication by using body language that reinforces and supports what you are saying as some people rely on visual cues.

Concentrate on your tone of voice when speaking

When the person is trying to communicate with you, always consider the situation and the context regarding what is being said.  For example, they may be saying that they did not like their dinner that evening, but if we look at the situation, we might realise that they were sitting with people they did not like, or they have missed their favourite TV show at that time.  It may not have been the dinner itself.

Some people just seem to have a knack for correctly interpreting signals from others. These people are often described as being able to ‘read people’. In reality you can build this skill by paying careful attention to nonverbal communication.

To enable a person with disability to fully participate in decision making, it is necessary to communicate information to them in a way that is appropriate to their preferred communication mode and format.  This may include written or spoken language, signs, symbols or line drawings, photographs or other objects.

Some people may need equipment to help them communicate, such as:

Words like ‘disabled’, ‘retarded’, ‘handicapped’ or ‘sufferer’ can be considered patronising and offensive.  These emphasise the disability, not the person.  Instead terms like ‘person with a disability’ or ‘person with autism’ should be used.

Remember, a disability in itself needn’t be disempowering, although often society’s response to a person’s disability can be.