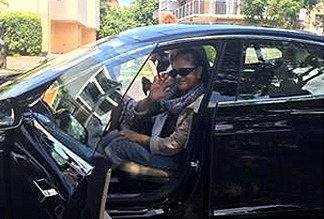 Monique, Gold Coast Local Support Group member checking out the inside of the car

The Queenslanders with Disability Network Gold Coast Local Support Group invited an engineer who owns a nearly driverless car to talk to the group about the development of driverless cars.

The Group were interested in exploring alternative transport options for people with disability and thought a driverless car could be a great option.

The speaker arrived at the meeting in his Tesla car, which is an electric car that has a self-driving function. The technology has not advanced to the point of completely driverless however engineers are working on this concept and in the next couple of years this will be a reality.

The speaker gave the group some interesting information about the development and design of the driverless car including lithium batteries in wheelchairs which was used as a template to design electric cars. They also found out that in the future car batteries will be solar powered so cars will be charged up and fuelled by the sun’s rays.

The group also had a chance to inspect the Tesla car and have a look inside and more excitingly under the bonnet where they discovered no engine, just more boot space.