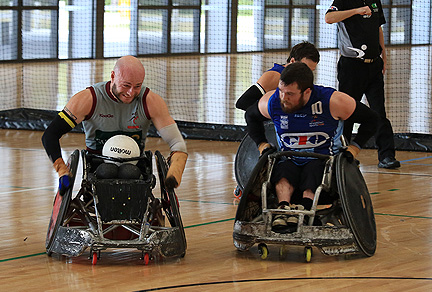 Suncorp Queensland Cyclones captain, Chris Bond, was voted tournament MVP and a member of the All Star 4 after a torrid round of Fierce 4 Rugby action at the Gold Coast over the weekend (16-19 June).

The Queenslanders bounced back after a disappointing 1 point loss to Victoria Protect Thunder in the semi-final to defeat traditional rivals the GIO New South Wales Gladiators 63-61 in the Battle for Bronze.

The New Zealand Wheelblacks took the overall honours defeating Victoria 66-44 in the final on Sunday afternoon, going through the entire weekend undefeated.

Other members of the All Star 4 were Ben Fawcett (NSW), Cam Leslie and Cody Everson (NZ).

Sport Development Coordinator (Wheelchair Rugby), Robyn Stephensen was impressed with the quality of rugby played over the weekend, “Though they play each other regularly these teams still really go all out when they are on court.  There really were some very close matches.”

For full results from the round visit http://www.wheelchairrugby.com.au/event-archive/2017brisbanechallenge

Stephensen also believes the Cyclones have continued to improve throughout the season, which holds them in good stead for a strong showing at the GIO Wheelchair Rugby National Championships to be held in Sydney 2-5 August 2017.

Sporting Wheelies and Disabled Association would like to thank all of the volunteers who ensure the event was such a success, as well as our sponsors, Motorama for their ongoing support.