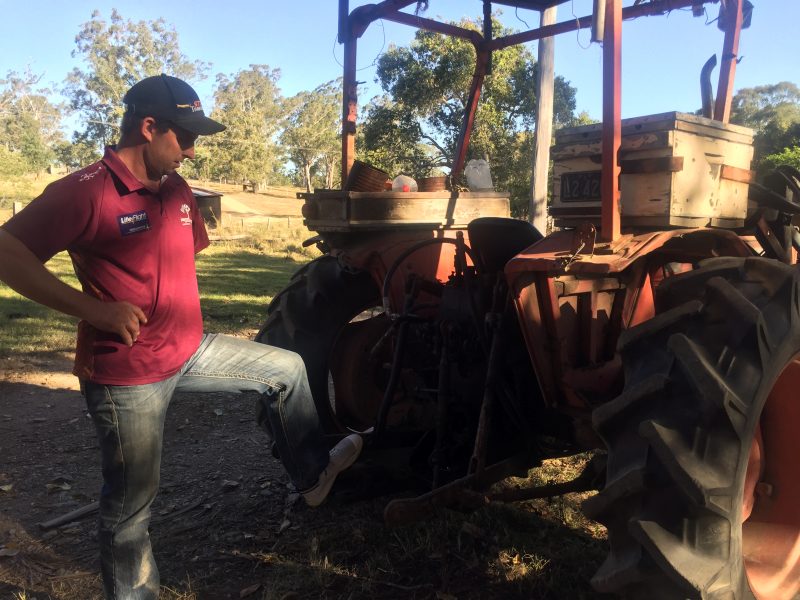 Nick is like every other Aussie bloke; he loves a good yarn, a nice cold beer, and a good laugh with mates.

He is a competitive woodchopper and has been since the age of 10.

His dad and brother were also both competition woodchoppers when he was growing up, which sparked his interest in the sport.

“My brother started competing, and I didn’t like the fact that he was competing and I wasn’t, so that sort of got me right into it,” Nick says. John Cotter is the organiser of the woodchop competition for the Royal Queensland Show, or Ekka. He says Nick is now a renowned character on the woodchopping circuit.

“I think the first time people see Nick chopping they do so with a sense of awe and surprise, then they’re overcome with support for him,” John says.

“Our ring announcer Neil Stewart points it out to the crowd quite early on when Nick is chopping and you can see children run down and have a good look and make sure that he definitely only has one arm. They’re completely fascinated by it.” Nick chopping at the Ekka when he was younger. Photo: Supplied

Nick says his brother had more strength than him for a long time, but that didn’t stop him from trying.

“Just the trauma to my body, nothing happened for me.” Nick and his father Alan Fredriksen, who was a wood chopper for many years when Nick was growing up. Photo: Maddelin McCosker

It was during the Easter holidays of 1994 when Nick (who was 8 at the time) was helping his dad, Alan, with some maintenance on their farm’s hay baler.

They had family staying with them at the time and the other kids were riding the horse, but Nick didn’t like the horse, so he decided to help his dad out instead.

“I always liked hanging out with dad and doing what he was doing,” Nick says.

Nick says the accident happened while he was helping dad with some maintenance on the baler and his shirt was caught in the PTO (Power Take Off) shaft.

The power of the machinery instantly ripped Nick’s left arm off.

“I remember the whole lot. Even right up until I was airlifted out of Kilcoy,” Nick says, recalling the day like it was as normal as any other.

“There is just a spilt second when I actually went through (the baler), I don’t remember that,”

“Dad heard me screaming, and he came running around…but by the time he got around there I was thrown out the other side. So, he ran back around and got me and got this dirty old singlet and put it over my arm and told me to hang on to it.

“I just had no idea what was going on, I thought I was going to get dragged down to the house to get a flogging. I knew I’d done something bad but I didn’t know what” he says. While Nick was in hospital, doctors were able to reattach his arm but had to remove it after complications arose. Photo: Supplied

It was when Nick got the house and his dad was calling triple zero that he realised he had lost his arm.

“It wasn’t until we got into the office…and my uncle saw me and just froze up and dad ripped the phone out of his hand,” Nick says.

“It wasn’t until he said that I’d lost my arm that I realised and took the singlet away and had a look.

“Dad put me in the old Kingswood and ran back up and grabbed my arm, chucked it the front seat and we started heading into town…I don’t think he (the ambulance officer) was expecting to get what he got when we pulled up” he says.

His mother Marie says it was a traumatic time for the family.

“Nicholas had nine surgeries in 12 days to try and save his arm,” Marie says.

She wasn’t home the day of the accident; her cousin who was visiting at the time had wanted to spend the day in Brisbane. She says she never went away during school holidays because it was her time with the kids, but she reluctantly agreed to go.

“We got home, it was probably about 6 o’clock in the afternoon,” Marie says.

“It was late and just on dark and I had noticed our car wasn’t there and I said to my cousin’s husband, ‘what’s happened?’.”

She was told that Nick was in theatre and they were “stitching it back on”.

“I went ‘WHAT’ and he just replied with ‘It’s his arm, his arm was decapitated’, and I was just thinking `you have no idea what decapitation means obviously’.”

After the surgery to remove Nick’s arm, Marie remembers him saying ‘Mum, they don’t have my arm on the pillow like they’re supposed to’. Nick and his mother Marie while Nick was in hospital. Photo: Supplied

She remembers telling Nick that the doctors had to remove his arm, and Nick replying, ‘How am I going to cope?’

Marie says she told Nick straight away he would be fine, that his family was there to support him, and the two talked about the winter Paralympics which had been on the month before.

“We talked about the sit-skiers and the amputees that were skiing…and talked about how amazing they were and we told him that just because you’ve got one arm, it doesn’t mean you won’t be able to cope,” Marie recalls.

“The challenges have come from perceptions of people in authority who think ‘well that’s not possible, you can’t do that because you have one arm,” Marie says.

“And we’ve had to fight through that…it’s OK if it can’t be done, but you have to at least try, and it was getting them to try that was the biggest challenge.” In the years since the accident, Nick has represented Australia in swimming and woodchopping, and has travelled the world doing both.

He has competed at the Ekka almost every year since 1999, and is part of the Ekka family.

John Cotter has known Nick for six years in his role organising the woodchop event at the Ekka.

He says the competitors and the officials don’t treat Nick any differently to anyone else.

“They see the importance of him not seeing the loss of an arm as a disability but as something he can work on and practice, so they very much look after him and support him,” John says.

He says he’s a renowned party boy on the circuit.

“Nick does enjoy a Bundaberg champagne,  and he decided to have a couple a few years ago and he returned to the axemen’s shed late at night and it was dark but there was still a few guys floating around,” John says.

“Anyway, Nick walked in and he tripped over an axe box and he’s come down hard on his face and I turned up and cleaned him up and he’s sitting there and he says to me ‘well that was a silly thing to do’ and one of the other axemen looked over and said to him ‘oi you dopey dora, why didn’t you put your hand out to catch yourself’ and everyone just burst out laughing, including Nick. “So what you have there is an acknowledgement that Nick has no arm, but through Australian humour, we normalised his current form. They have accepted it, they have put humour into it and they get on with it and I think that’s what normalising disability is all about.”

When asked if he sees himself as a person with a disability, Nick doesn’t respond straight away.

“Not anymore,” he says after thinking it over. “I have done over the years, but not anymore.”

Nick says that because he has been woodchopping for so long, people forget that he has one less arm than the other competitors.

“Guys will come up to me and ask, ‘are you left or right handed?’… and I usually just tell them ‘take a wild guess’ and they’ll look at me like ‘Oh shit.’,” he says.

“But one thing with the woodchoppers, I don’t think it’s second nature to them that I do have one arm, because no one really notices it that much until they actually see me swinging an axe.”

A quick search on the Internet takes you to Nick’s Facebook page ‘Nick Fredriksen, One Arm Woodchopper’, which has more than 5,000 likes.

Some of his videos have been viewed millions of times, around the world.

“If I can’t do it, I’ll find a way to do it,” Nick said. “There is always an easier way. I tell people all the time ‘always watch what the one-armed guy does because he’ll find the easiest way.”