Labor Enabled – The Queensland Political Movement for People with Disabilities by: Student Journalist 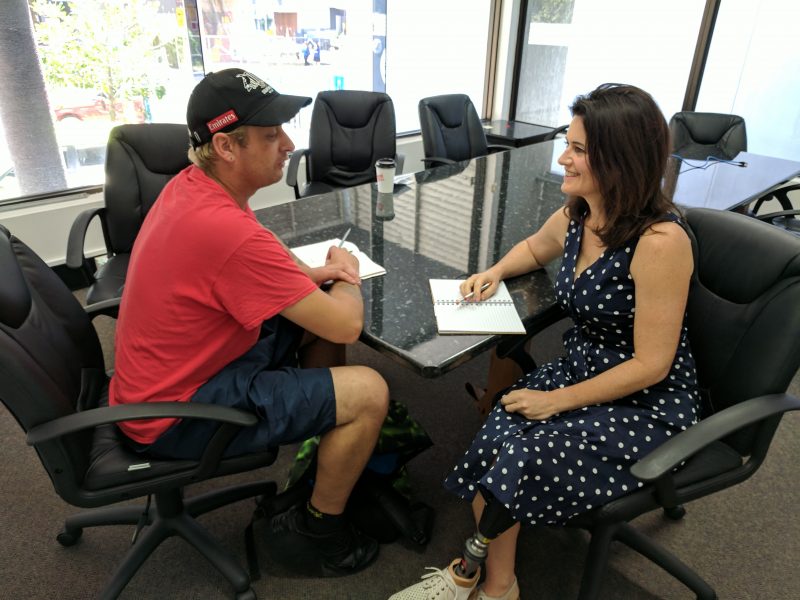 The decision-making tables of Australia are often filled with politicians and other leaders making decisions on behalf of other people, with little to no lived experience or knowledge of how those people are affected by those decisions.

“There’s nothing worse than when you turn up to something and listen to someone talk about disability policy and they just haven’t lived it.”
– Brad Sparrow

For Brad Sparrow, creating an organisation that could give a voice to people with disabilities was a long time coming.

Brad has dystonia, a neurological movement disorder that contracts the muscles in his legs, making him walk on his toes.

He was volunteering at a street stall with Terri Butler, the Federal Member for Griffith, when he met a young woman with a cognitive disability who came to speak to Terri. Many train stations in SEQ don’t have any wheelchair access. Photo: Angus Kennedy

“When you talk about groups that are discriminated against, people don’t think about disability first. They think of, automatically and particularly in Australia, people think of gender, and then Aboriginal and Torres Strait Islander peoples, the rainbow community. “Disability always seems to be one of those groups that people sort of mention last.”

With almost one in five Australians identifying as having a disability, the creation of a dedicated political group for people with disabilities is long overdue.

Labor Enabled was established as an organisation within Queensland Labor in December of 2015, with Brad Sparrow chairing their founding meeting just a month earlier.

This was a significant achievement as Queensland became the first state or territory in Australia to establish a group within a political party dedicated to people with disabilities.

Queensland Labor’s State Platform 2017 is the first policy platform in the country to include a standalone disability subheading.

Labor Enabled’s Convenor Ali France said that this wouldn’t have occurred without Labor Enabled and the Office of the Queensland Minister for Disability Services leading the push for that recognition.

“The issues we are targeting cut across all areas of government. In particular, we want to look at improving employment rates for people with a disability.

“Many people with a disability struggle to find work and it doesn’t matter whether you acquire your disability later in life or whether you’re born with it there is an assumption out there that you’re going to be a burden. We need to change that.”

The 2017 Policy Platform includes information on Labor’s values in relation to people with disabilities, their achievements, their beliefs, and their priorities in government. Parking for people with disabilities is often limited or inadequate. Photo: Angus Kennedy

After becoming an Australian citizen and joining the Labor Party, Brad Sparrow attended his first branch meeting, but said that he didn’t feel welcome because of how other branch members viewed his disability.

“At that time, we met under a Bowls Club, and I remember going down these stairs and so if you were completely wheelchair bound you wouldn’t be able to access it,” Brad said.

“I remember people were very standoffish at the time. I said I had just become a citizen and was debating whether to join the Greens or the Labor Party and that sort of went down like a lead weight and people were just very intimidating.”

Labor Enabled meetings, however, don’t run in the same style.

“The first meeting I went to it was just such a good space to be in,” Ms Aitken said.

“It was the first time in a very long time that I felt accepted and that my abilities, the fact that I had MS, just didn’t matter – these people, they could not give a shit and it was just so refreshing to have that.

“I absolutely love going along and it’s just different because it’s the lack of judgement.”

An important part of Labor Enabled is its foundational purpose of giving people with disabilities a voice.

Labor Enabled’s Committee has 11 people, with a policy in place for 6 members of the committee to have a disability, and five to have a lived experience of someone close to them having a disability. Many buildings are inaccessible to people with disabilities. Photo: Angus Kennedy

A large amount of difficulty arises for people with disabilities when it comes to employment.

According to the Australian Bureau of Statistics, 50 per cent of working aged people who have a disability are not in the workforce.

Ms Aitken said she had difficulties finding employment after being diagnosed with MS and moving to Brisbane for better treatment.

“I thought it would be quite easy for me to just get another job because I had a lot of contacts and have got quiet an impressive resume, but I was very public about my MS and owned it very publicly on Facebook initially,” Ms Aitken said.

“When I moved down here I discovered that it wasn’t going to be that easy to get a job because a lot of people didn’t know what MS was.

“A lot of people seriously thought I was going to be dead in a short time or very physically disabled and wheelchair bound.

Even though there’s all these great laws that say that there’s not, there absolutely is discrimination against people with disabilities.”

Labor Enabled also has the support of Queensland Labor state secretary Evan Moorhead, and Leader of the Opposition Bill Shorten.

To find out more information about Labor Enabled, or to join, go to www.LaborEnabled.org.