Art from the Margins – Changing Lives One Painting at a Time by: Student Journalist 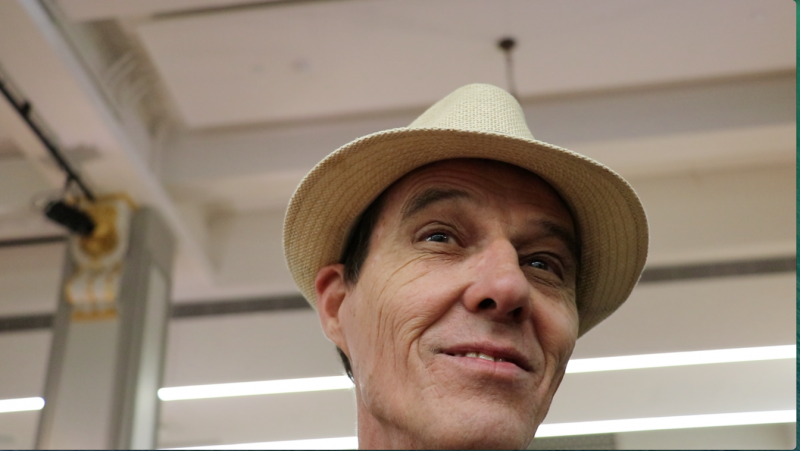 Marlene Wilson with her painting which she says should be viewed from all angles. Photo: Lilly McKenzie Marlene with the second artwork she entered in AFTM this year. Photo: Lilly McKenzie

Wesley Mission’s Art From the Margins exhibition celebrated its 10th anniversary at this year’s Brisbane Festival.

The exhibition features artwork from those living in the margins of society, homeless people, those struggling or recovering from addiction, and people with a disability, giving many an outlet they never thought they’d get.

The show is open to the public, giving artists a chance to show their paintings, and receive awards for their artworks.

Artist Michael Tichowistch, whose artwork is featured in this year’s calendar, said art helped him out of a dark hole.

“It’s very good for healing, it’s a spirituality that you have in your life,” Michael said. “Art was the thing that, I sort of took a shine to. Maybe it’s the colours, maybe it’s the experiences, maybe it’s the frustrations, but when it all comes together it gives you self-esteem, and makes you feel better.

“With life, everyone’s got a talent and they just don’t realise it. And if you do have a goal, don’t be afraid to fall down a thousand times as long as you get up. And when you get up, that self-esteem will make sure you get up.”

Indigenous artist Marlene Wilson, who has a disability that affects her mobility, has been painting for six years.

Marlene was honoured with the St Andrew’s War Memorial Hospital Indigenous Award, her first award in the three years she has been showing her paintings at Art From the Margins.

She first started painting when her church congregation grew, and she wanted to help raise money for their building fund.

She said she asked God what her talent was, and a week later she started painting.

“I did one painting, about my childhood, the first week,” Marlene said. “The second week I did one about how my life had changed after God came into it, and the third week I did 11 artworks and sold my first painting without even leaving my home.

“One of the church members came to my house, and ended up buying three paintings. And then turned up a couple days later with painting supplies that he had, and I said, what’s going on? And he said these are for you, and I said, but you’ve already paid for your artwork. And he said, I want to encourage you to keep going.”

She donates all of the money she makes from her paintings to her church, and other charities.

Marlene was honoured with the St Andrew’s War Memorial Hospital Indigenous Award, her first award in the three years she has been showing her paintings at Art From the Margins.

She said it was special to be honoured, not just as an artist, but as an Indigenous artist.

“Getting an award is so amazing, getting that recognition,” she said. “But, getting the Indigenous artist’s award? That makes me very emotional because its recognition of a past that I wasn’t able to experience, but that I’m able to start experiencing now.