AFL program giving everyone opportunity to play by: Student Journalist 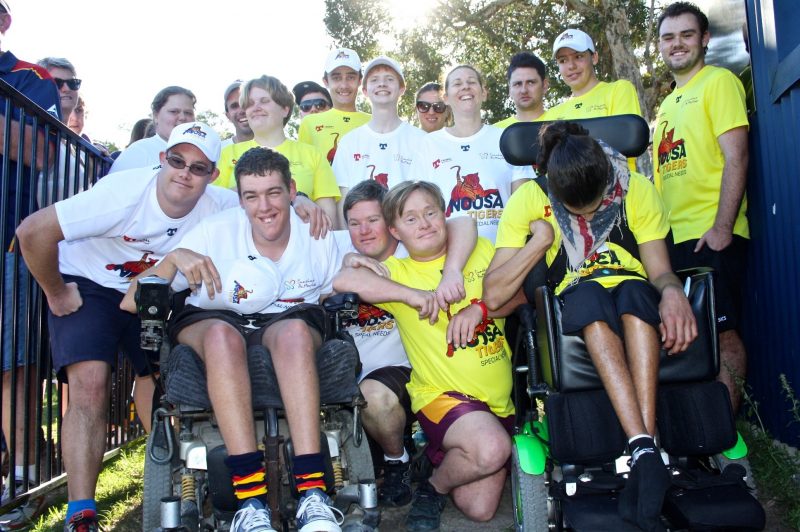 The Noosa Tigers AFL club is giving people of all ages and disabilities the opportunity to play football through its disability program.

In just three years the program has built up to 20 participants who all live with disabilities such as cerebral palsy, autism, and Down syndrome.

The chance to play on the same field as everyone else has made all the difference to Alex Weatherill and his mates Oliver Guthrie, Shane Hicks and Curtis Walsh.

“I love the big runs and the tackling. I’m pretty good at tackling,” Mr Weatherill said.

He admits there’s actually more to it than just his love for AFL.

“I’m also playing to improve my kicking for NRL – I want to play for the Broncos one day,” he said. While Mr Hicks also enjoys the rough and tumble of Aussie Rules, he says there’s a lot more to it than that.

“There’s the physical aspect of it and then there’s the fun part. We enjoy ourselves and have lots of fun,” he said.

Mr Guthrie, who used to help out as a water boy for the senior players, agrees. He said he’s glad he’s got the chance to play.

“It’s a good thing. My mum’s really proud, she wants me to be part of sports and everything else,” he said.

The program was initiated by Noosa Tigers president Rob Purves in 2015 as a way to give back to the community.

“We were thinking about what we can do to help people in the community and with our link with Sunshine Butterflies, we decided to run a special needs AFL program,” Mr Purves said.

Sunshine Butterflies is a Sunshine Coast based not-for-profit disability services and support organisation.

“We’re lucky we have them to help with resources, like carers, transportation and all that,” he said. “Without them it would be a struggle, a big struggle.”

During the 12 week program, the players meet every Wednesday to learn the rules and tricks of the game.

“We’re teaching them all the skills of AFL footy, like kicking, marking and handballing, but it’s more about just getting them out there and having a bit of fun – even taking them out of their comfort zone,” Mr Purves said. Every Wednesday for 12 weeks the players meet to learn the skills of AFL. Photo: Lucy Mills

Sunshine Butterflies founder Leanne Walsh said she was glad the Noosa Tigers have given people on the Sunshine Coast the opportunity to not only be involved in a sport, but also be involved in a club.

“Even those that don’t play footy come to watch the Tigers and help out around the club, and it’s given them purpose to be part of a club,” she said.

“Some of them have gone on to want to play as well, and yeah… It’s just great to have the opportunity.”

The program is the only one of its kind in the area, but Mr Purves hopes that will change in coming years.

“It will take four or five years we reckon but hopefully we can start having a bit of a competition on Saturday mornings or something,” he said. Mr Purves is from Melbourne originally and at his football club there they had a similar program.

“We ended up having a competition with four other football clubs that were doing the same thing,” he said. “That’s what we’re hoping, that it will grow into something like that here as well.”

The Noosa Tigers disability program has received nothing but positive feedback.

“There was a game we played two years ago where I was told that people in the crowd had tears in their eyes just from the enjoyment,” Mr Purves said.

It may be challenging at times, but for Mr Purves, seeing the players improve makes it all worth it.

“It’s just fantastic seeing the improvement in them. I’m always looking to take them out of their comfort zone, making them jump in the air, roll on the ground and that – and they do it,” he said.

“Some are really timid at the start but then they don’t care about it in the end. Some of them you even have to pull back a bit because they go in too hard.

“At the end of the day, it’s all about having fun and getting them out there.” They are now slowly expanding the program and this year they’ve had some special needs kids from school getting involved as well, Mr Purves said.

“With the club appointing a general manager, that was one of his jobs, to ramp it right up by getting out there and going to other associations and say ‘this is what we do, come along’.”

Noosa Tigers’ next disability program will start in April next year, and people of all ages and disabilities are welcome to join.